Dr. James Bonheur has leveraged his expertise in minimally-invasive vein treatment techniques to become a leading phlebologist (vein doctor or vein specialist) in the Stamford, Greenwich, Norwalk and Bridgeport, CT area. Dr. Bonheur was listed amongst America’s Top Surgeons in 2008 in the field of General Surgery/Bariatrics. He is fluent in both English and Spanish and has a working knowledge of French. Dr. Bonheur received his education at Adelphi University in Garden City, NY and his medical degree from SABA University School of Medicine (Netherlands-Antilles). He subsequently performed residencies at both Stamford Hospital (Stamford, CT) and Boston University Medical Center, later serving as chief resident at Stamford. Beyond this he has received specialty training as a fellow at Boston University (surgical research), Massachusetts General Hospital (vascular research) and Danbury Hospital (laparo-endoscopic & bariatric surgery). Dr. Bonheur is board-certified by the American Board of Surgery and a member of numerous professional societies including the American College of Phlebology (vein doctor specialty), the American College of Surgeons, the Society of Laparoendoscopic Surgeons, the American Society for Metabolic and Bariatric Surgery, the Society for Surgery of the Alimentary Tract, and the Society of American Gastrointestinal and Endoscopic Surgeons.

Some of Dr. Bonheur’s awards include:

Dr. Bonheur enjoys his work as a Stamford vein specialist and the satisfaction of achieving both medical symptom improvement and enhancing cosmetic appeal. His deep, specialty training in minimally-invasive techniques makes him a leading vein doctor for the Stamford, Greenwich, Norwalk and Bridgeport area and the best choice for comprehensive venous disease treatment. 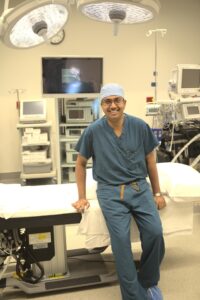 Fellowship-trained in advanced gastrointestinal minimally invasive surgery, bariatric surgery, and advanced endoscopy, Jai Prasad, MD, provides a wide range of services to patients at AMI Surgery, located in Stamford, Connecticut, and Port Chester, New York. Dr. Prasad earned his medical degree from All India Institute of Medical Sciences, New Delhi, India. After completing his residency training in the United Kingdom and in the United States at the University of Toledo College of Medicine and Life Sciences in Ohio, Dr. Prasad went on to complete his fellowship in advanced gastrointestinal minimally invasive surgery, bariatric surgery, and advanced endoscopy at Geisinger Medical Center in Danville, Pennsylvania. Dr. Prasad is passionate about patient-centered care and always involves his patients in decisions about their care. Along with his extensive experience in minimally invasive primary and revision bariatric and foregut surgery, he strives to use these skills to deliver exceptional, personalized care to each and every patient.